What have we learned about risk in the decade since the financial crisis, and how do we now consider risk moving forward? These questions will be addressed in this tenth consecutive annual Risk meeting, co-hosted by Morgan Stanley and the Santa Fe Institute. This meeting will include reflections from some of the most insightful speakers from the last ten years, as well as new speakers. 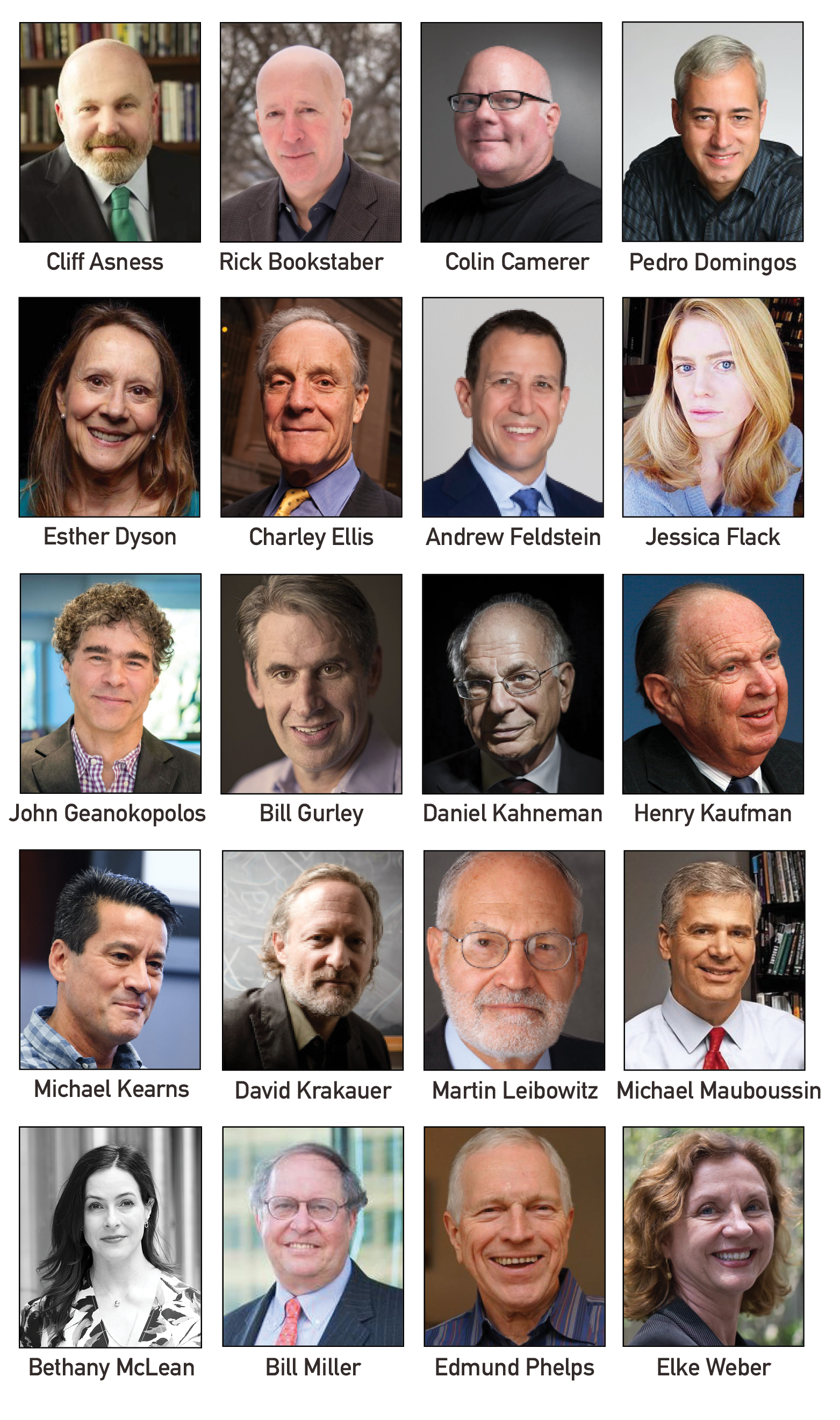 Cliff is a Founder, Managing Principal and Chief Investment Officer at AQR Capital Management. He received an M.B.A. with high honors and a Ph.D. in finance from the University of Chicago, where he was Eugene Fama’s student and teaching assistant for two years (so he still feels guilty when trying to beat the market).

Rick is the author of The End of Theory, which critiques the applicability of economics in dealing with financial crises, and proposes an alternative paradigm using agent-based models. Currently, he is the Chief Risk Office for the Office of the CIO at the University of California.

Colin Camerer is a pioneer in behavioral economics and in neuroeconomics. In 2013, he was named a MacArthur Fellow.

Pedro Domingos is a professor of computer science and engineering at the University of Washington and the author of 'The Master Algorithm'. He is a winner of the SIGKDD Innovation Award, the highest honor in data science, and a AAAI Fellow.

Esther Dyson is the executive founder of Way to Wellville, a 10-year, five-community nonprofit project devoted to implementing, illustrating and modeling the beneficial impacts, of investing in health. From 1997 to 2012, she was a trustee of the Santa Fe Institute.

Charley Ellis is the founder of Greenwich Associates, the leading research-based strategy consulting firm to the financial services industry, and a member of the advisory board at Wealthfront. Charley has written 16 books on individual investing, including the classic Winning the Loser’s Game.

Andrew Feldstein is BlueMountain’s Co-Founder and Chief Investment Officer. Prior to co-founding BlueMountain in 2003, Mr. Feldstein spent over a decade at J.P. Morgan where he was a Managing Director.

Jessica Flack is a professor at the Santa Fe Institute and the director of SFI's Collective Computation Group (C4). Flack works on fundamental problems in evolutionary theory concerning collective computation & information aggregation at all levels of biological organization

Henry Kaufman is President of Henry Kaufman & Company, Inc., a firm established in April 1988, specializing in economic and financial consulting. For the previous 26 years, he was with Salomon Brothers Inc., where he was Managing Director, Member of the Executive Committee, and in charge of the firm’s four research departments.

Michael Kearns is a professor in the Computer and Information Science Department at the University of Pennsylvania, where he holds the National Center Chair, and an external faculty member at the Santa Fe Institute. His primary research interests are in machine learning and algorithmic game theory, and he has consulted extensively in the technology and finance industries. He is currently a Senior Advisor at Morgan Stanley on machine learning and AI. With co-author Aaron Roth, he is writing a general-audience book on social norms and machine learning titled The Ethical Algorithm (Oxford University Press, 2019).

David Krakauer is the President and William H. Miller Professor of Complex Systems at the Santa Fe Institute. His research explores the evolution of intelligence on earth.

Martin L. Leibowitz is the Vice Chairman of the Morgan Stanley Research Department’s global strategy team. Over the past eight years, he and his associates have produced a series of studies on such topics as asset allocation, policy portfolios, rebalancing strategies, and asset/liability management.

Michael J. Mauboussin is Director of Research at BlueMountain Capital Management in New York. He is the author of The Success Equation: Untangling Skill and Luck in Business, Sports and Investing and is Chairman of the Board of Trustees at the Santa Fe Institute.

Bethany McLean is a contributing editor of Vanity Fair. Together with Joe Nocera she co-authored All the Devils Are Here, which Paul Barrett called "as legible an overview as exists" of the 2008 financial crisis.

Bill Miller is the Chairman and Chief Investment Officer of Miller Value Partners, LLC and Life Trustee and Chairman Emeritus at the Santa Fe Institute. During his tenure as sole manager of the Legg Mason Value Trust, its performance exceeded its S&P 500 benchmark index for 15 consecutive years.

Edmund Phelps, the winner of the 2006 Nobel Prize in Economics, is Director of the Center on Capitalism and Society at Columbia University. He has written books on growth, unemployment theory, recessions, stagnation, inclusion, rewarding work, dynamism, indigenous innovation and the good economy.

Elke Weber is an expert on behavioral models of decision-making under risk and uncertainty, investigating psychologically and neurally plausible ways to model individual differences in risk taking and discounting, specifically in risky financial situations and environmental decisions. Weber is past president of the Society for Mathematical Psychology, the Society for Judgment and Decision Making, and the Society for Neuroeconomics.