The countervailing pressures of economic pain and disease containment are keeping the COVID-19 pandemic at a noisy equilibrium.

Read the Reflection, written 12 August 2021, below the following original Transmission.

There’s a magic number in epidemic modeling. When it exceeds 1, new infections grow exponentially, spreading like wildfire. When it falls short of 1, the virus succumbs to exponential death.

That basic reproductive number, R0, is simply the average number of new infections each existing case will spawn. If every coronavirus victim infects, on average, two new people, R0 (pronounced “r-naught”) is 2 and the virus doubles its way around the globe. If R0 is near zero, whether due to the host’s immune system or lack of contact with others, the virus dies out quickly.

R0 equaling 1 is a critical equilibrium. Here the caseload stays constant on average but is subject to large fluctuations.1 In this essay, we argue that R0 for COVID-19 in the U.S. is likely to hover near 1 or oscillate around 1 for a lengthy period. This is an example of a phenomenon known as “self-organizing criticality,” which is observed in many complex systems. Another example of self-organized criticality is seen in earthquakes. Here the inexorable motion of tectonic plates is balanced by friction until some part of the fault ruptures and moves suddenly. The result is a critical equilibrium with frequent small earthquakes and rare large earthquakes.

The natural value of R0 for COVID-19 in a naïve population appears to be above 2, leading to rapid spread in the absence of mitigation. Mitigation efforts have brought R0 below 1 in many countries but at great economic cost. In some countries such as Taiwan and New Zealand, very effective mitigation has brought case numbers to a low enough value that relatively inexpensive measures now suffice.

However, in the U.S. with its large and heterogeneous population and weak central leadership on this issue, suppressing R0 below 1 is currently extremely costly and likely to remain so for the foreseeable future. In this regime, where mitigation is extremely expensive but having an exponentially exploding number of cases is also unacceptable, R0 will remain near 1. If R0 exceeds 1, then exponential growth quickly leads to unacceptable rates of infection, hospitalization, and death, but as R0 is suppressed by the crude tools of social distancing and business closures, the economic pain creates great pressure to open up the economy, pushing R0 back above 1. The combination of these two forces generically and robustly keeps R0 close to the critical value of 1. Many current models of the epidemic include both the biology of infection and policy responses in more or less detail2 but it is useful to understand that these models will display the general feature of self-organized criticality so long as the two strong and opposing forces are incorporated.

A simple, two-variable class of dynamical models demonstrates the idea of self-organization to R0 = 1. These models cannot be used to make quantitative predictions, but they reveal important qualitative features. The two variables are C(t), the number of new infections at time t, and R0(t), the (time-dependent) reproductive number. Roughly speaking, time is measured in weeks. The equation for the number of new infections, C(t+1) = R0(t)C(t), is simply the definition of R0. The dynamics of the reproductive number is the new ingredient, and it takes the form R0(t+1) = R0(t)  +  F[C(t), R0(t)]. There is wide latitude in constructing the function F[C,R0]. It should be negative when the number of new infections is above an acceptable threshold, pushing the system toward mitigation. F[C,R0] should be positive when R0 is below 1, leading to large economic costs that push the system away from mitigation. Depending on the details of the function F and the initial conditions, there are two generic behaviors. Either R0(t) will evolve to the critical value of 1 and C(t) will settle to a steady state value given by solution to F[C, 1] = 0. The result from a simulation of a specific choice of F and initial conditions is plotted Fig. 1.

Alternatively, for other choices of  F and initial conditions,  R0(t) oscillates around 1 and C(t) oscillates as shown in Fig. 2. Figure 3 shows the behavior or R0(t) for the two cases of Fig. 1 and 2. Finally, one can add noise to either equation in various ways. When weak noise is added to the system, these qualitative behaviors persist but become quite noisy, as shown for specific simulations in Fig. 4 and 5.

In conclusion, one can expect R0 to stay near 1 and the number of new cases to stay relatively high for an extended period, but with lots of unpredictable and perhaps oscillatory behavior along the way. The only way out is with an effective treatment or to dramatically lower the cost of an R0 below 1 through natural herd immunity, a vaccine, or effective testing and contact tracing. 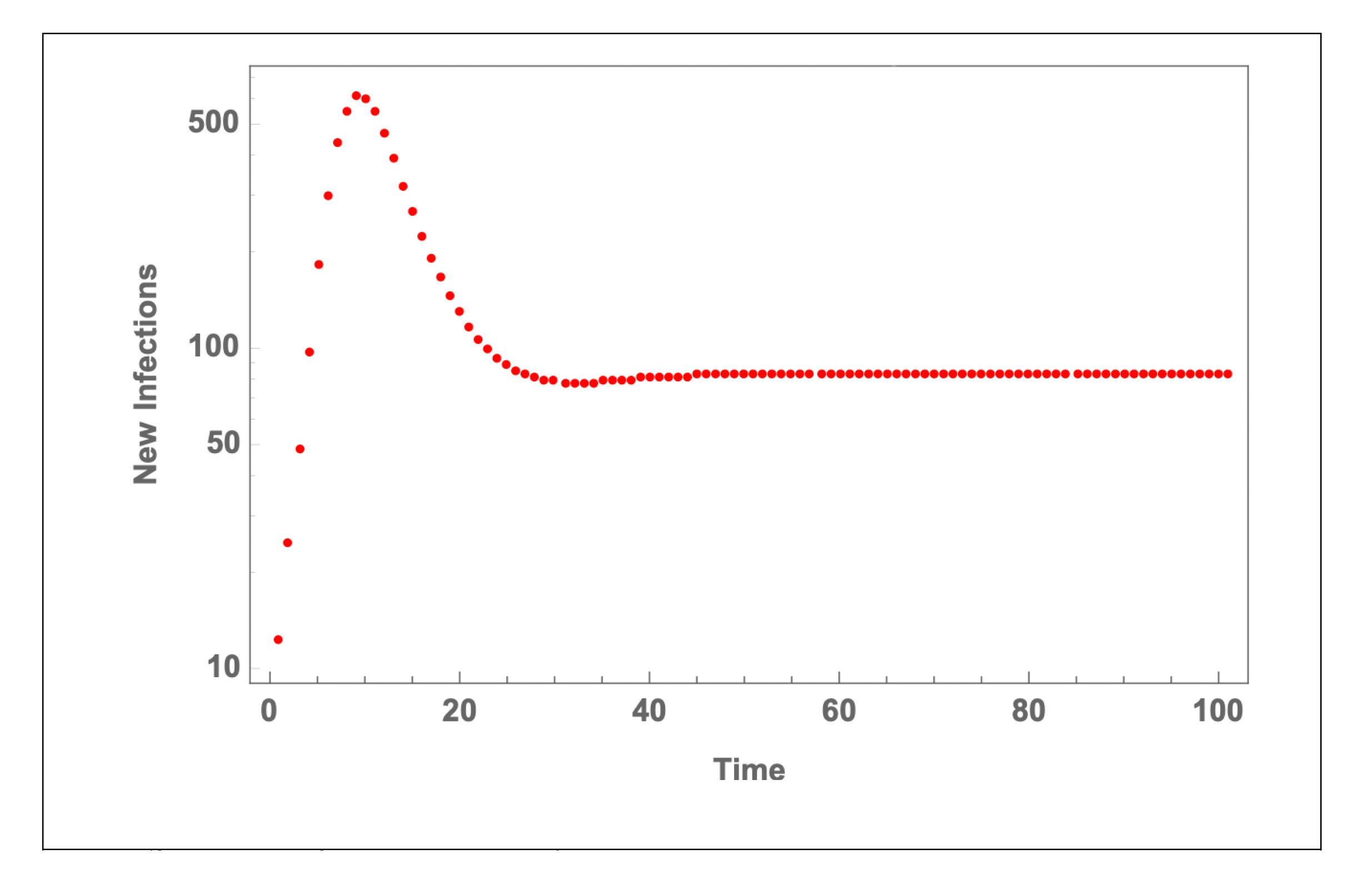 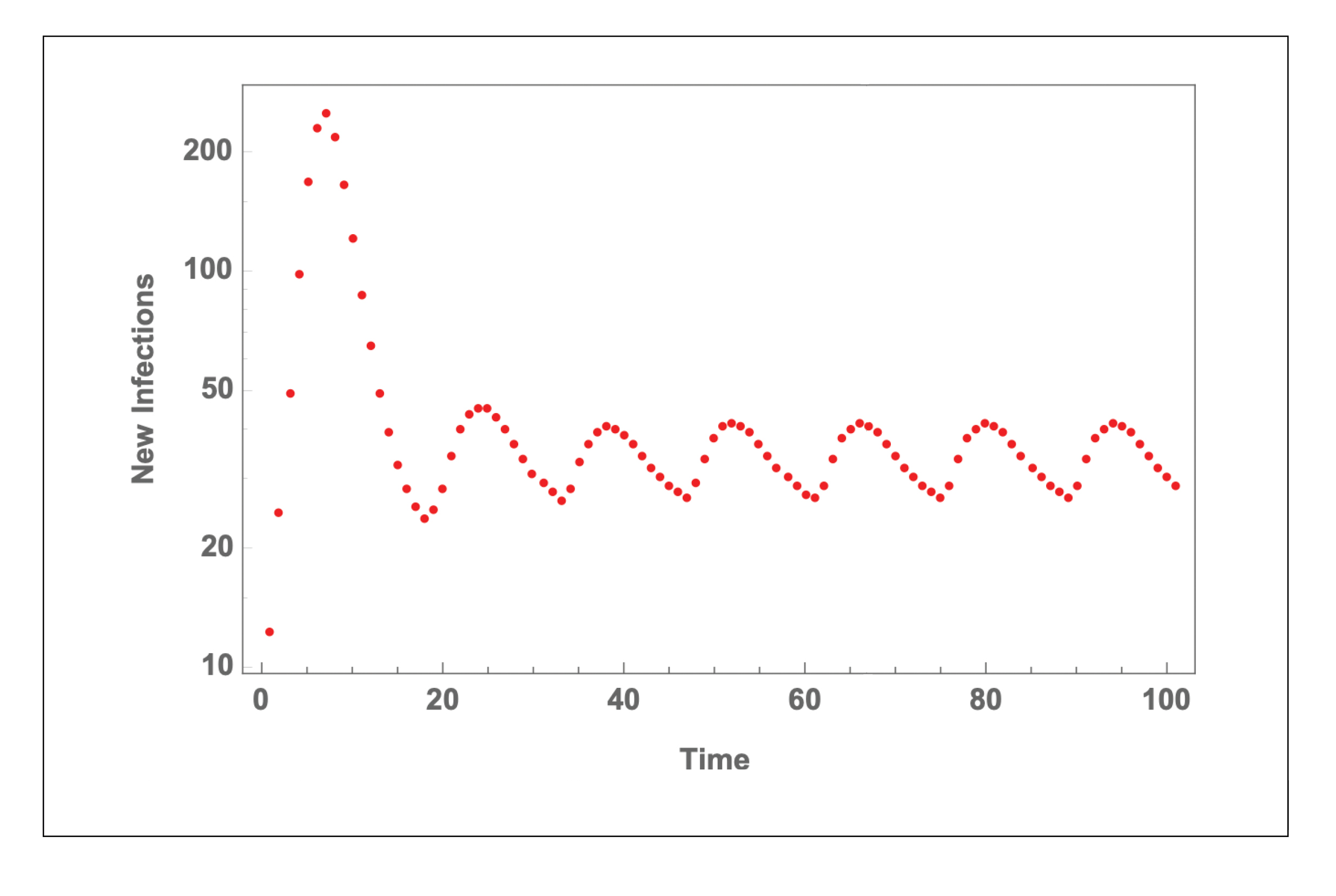 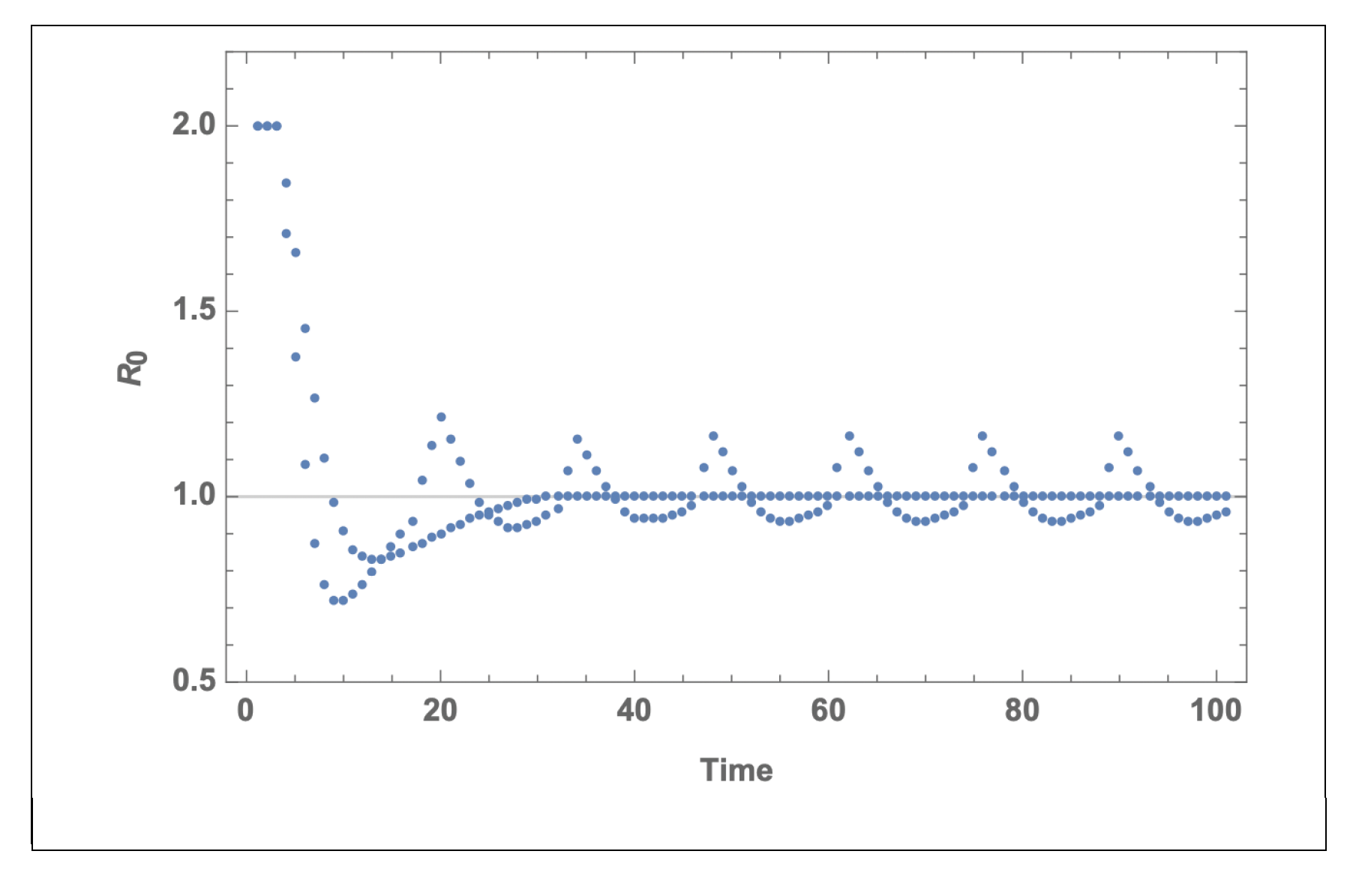 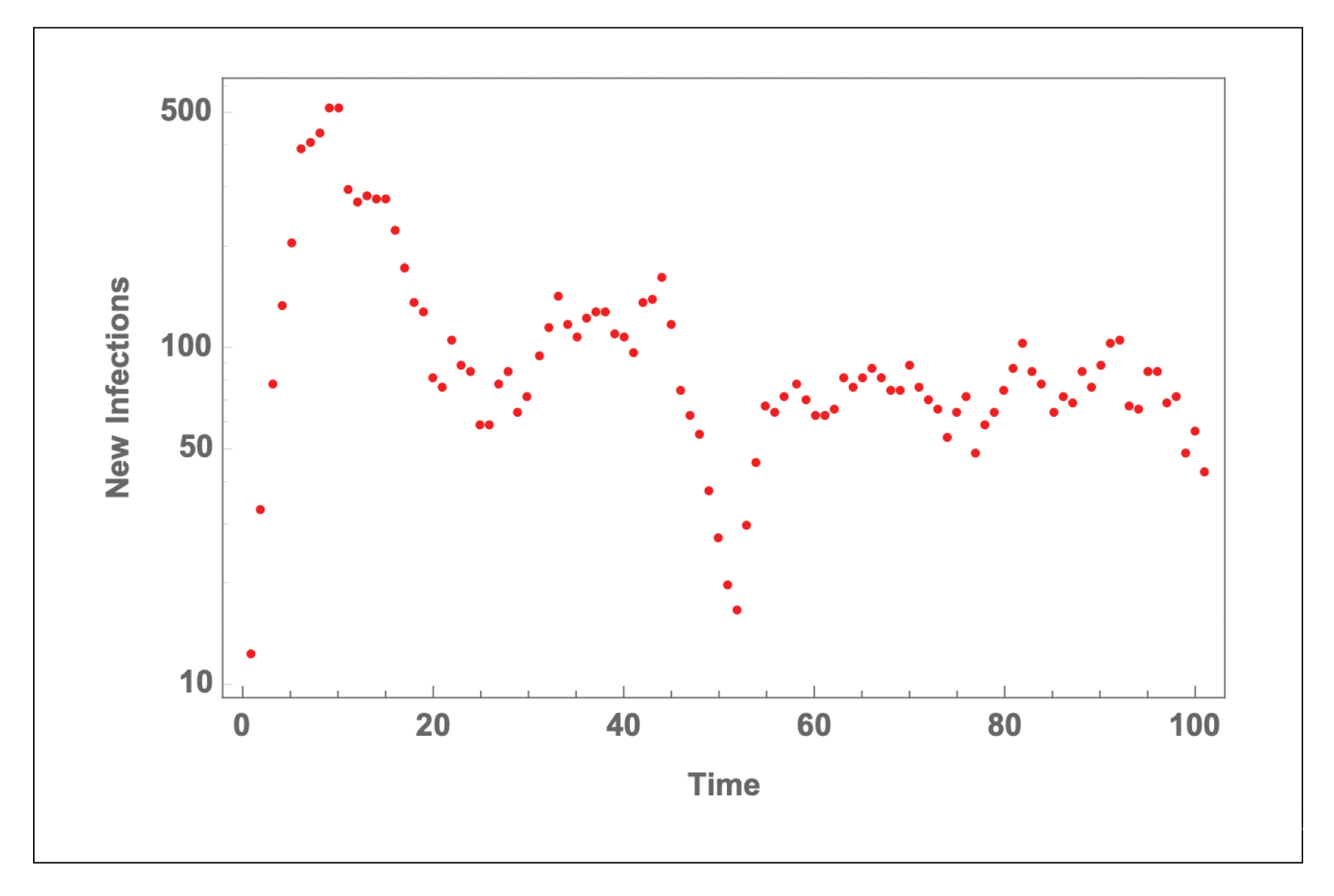 Figure 4 New infections vs time (same as Fig. 1 but with noise) 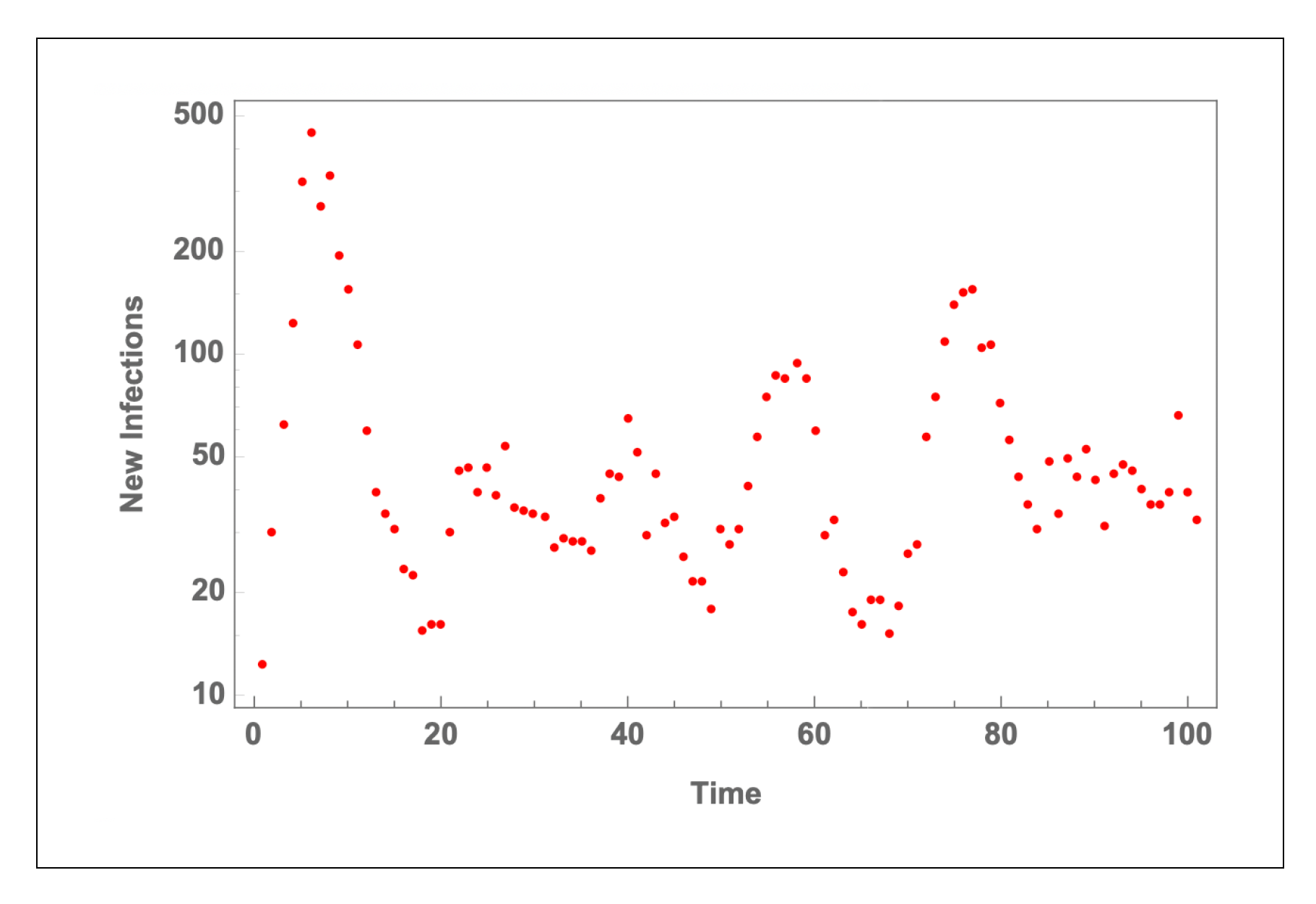 Figure 5 New infections vs time (same as Fig. 2 but with noise)

Read more posts in the Transmission series, dedicated to sharing SFI insights on the coronavirus pandemic.

Listen to SFI President David Krakauer discuss this Transmission in episode 34 of our Complexity Podcast.

As I write this reflection, much of the world—including the US—is experiencing yet another surge in COVID-19 cases, attributed to the highly contagious Delta variant and to the relaxation of restrictions meant to limit the spread of the virus. The good news is that we now have highly effective vaccines and a substantial fraction of the population in many wealthy countries has been vaccinated. The current surge is primarily affecting unvaccinated populations. None of these eventualities could have been predicted a year ago when we were still early in the pandemic and the Transmissions articles were written, and yet none are entirely surprising. The collaboration between scientists, the pharmaceutical industry, and government produced safe and highly effective vaccines at scale in an amazingly short time. One lesson of the pandemic is that human ingenuity in the face of adversity should never be underestimated. Another lesson, however, is that the virus has also proved to be ingenious in evolving ever greater transmissibility—the Delta variant is far more infectious than the virus that originally spawned the pandemic.

My Transmission predicted that we would see a series of surges in infection based on the competing effects of the natural exponential growth in infections and the human response to the virus. High caseloads would cause individuals and governments to respond with measures to decrease the spread of the disease. These measures would work but at a high cost, both economically and socially, so that upon successfully mitigating the current surge, they would be partially or completely abandoned, setting the stage for the next surge.

Did this prediction prove to be true? The pandemic has indeed been marked by a series of surges, and the response has also followed the predicted pattern of tightening restrictions after caseloads increase and relaxing restrictions when caseloads decrease. In this sense the simple model did a great job at qualitatively predicting the trajectory of the pandemic, and I believe it is substantially the correct explanation. However, establishing causality is difficult since factors such as seasonality and the advent of more infectious variants may have played an important or even dominant role in the natural history of the disease. Academic research and common sense show that social distancing, closures, masks, and contact tracing reduce the transmission of the virus, but they do not prove that the imposition and relaxation of these measures were the dominant reason that the graph of infections looks like a series of waves.

The model described in my Transmission is extremely simple. It is a mathematical model with two variables that incorporates the ideas described above. It produces curves of infection numbers, but these curves are only useful qualitatively. Far more elaborate models developed by a number of research teams include spatial structure and many details of the transmission process that are lumped together in the simple model. These models are able to make useful semiquantitative predictions but involve many parameters and must be frequently updated by teams of scientists. So, what’s the point of a well-designed simple model such as the one described in my article? The answer is insight! The reasons that a complex system behaves qualitatively in a certain way, independently of many details, can be revealed by simple but robust models and obscured in more elaborate models with many parameters. Complex-systems science needs both types of models in both research and policy making.

Read more thoughts on the COVID-19 pandemic from complex-systems researchers in The Complex Alternative, published by SFI Press.

Melanie Moses on 'How to Fix the Vaccine Rollout'