The novelist Cormac McCarthy has been a fixture around the Santa Fe Institute since its embryonic stages in the early 1980s. Cormac received a MacArthur Award in 1981 and met one of the members of the board of the MacArthur Foundation, Murray Gell-Mann, who had won the Nobel Prize in physics in 1969. Cormac and Murray discovered that they shared a keen interest in just about everything under the sun and became fast friends. When Murray helped to found the Santa Fe Institute in 1984, he brought Cormac along, knowing that everyone would benefit from this cross-disciplinary collaboration.

In Santa Fe, the pair would often visit at Murray’s home and cook elaborate lunches and dinners, then share them with SFI researchers, including Geoffrey West, John H. Miller, and Eric Smith, and with filmmaker Celia Lowenstein. Together they would discuss everything from the pine tree shillings in Murray’s coin collection to gravitational waves and the relative merits of fine wines. After Cormac moved from El Paso, Texas, to New Mexico, he became an SFI board trustee — a position he’ll hold for life.

Early days of “The Passenger”

In 2006, Cormac’s novel “The Road” was published to great acclaim. The next year it won the Pulitzer Prize. Everyone in the literary world — not to mention at SFI — anticipated that the following year would bring the new novel that Cormac had talked about on occasion. Cormac would happily regale you with stories for hours on end, but he was very tight-lipped about his own work; yet everyone at SFI knew that “The Passenger” was coming. In fact, they could often see him in his small office, working on the book with his pale blue Olivetti manual typewriter. The racket sometimes attracted visitors to his door, where they would peer in at this white-haired apparition hunched over the infernal machine, knocking out the words as if sparring in a boxing ring. But more years passed and no new novel appeared. Aware of his penchant for privacy, no one would ask. Cormac loved SFI because it was a cornucopia of fascinating ideas and intellectual stimulation, but it also offered quiet refuge and beloved anonymity.

At the same 1981 MacArthur Foundation ceremony where Cormac had met Murray, he befriended another “genius grant” awardee, physicist George Zweig. George and Murray shared the distinction of having both discovered the subatomic particles that made up protons — Murray called them quarks; George called them aces; Murray’s name stuck. George and Cormac spent the following years discussing what George called the Night Shift — a sudden inspiration that solves a long-standing problem, often while one is falling asleep or waking up.

One day a few years ago, Cormac was sitting in the library at SFI with Laurence Gonzales, who was an SFI Miller Scholar from 2016 to 2020. Cormac said, commenting on the Night Shift, “Writing can be like taking dictation.” He’d been working on “The Passenger,” he said, since the 1970s. “I wrote four pages this morning,” he said. “I can still write.” He offered a wry smile. “But I haven’t been feeling well, and it’s hard to write when you’re not feeling well.”

He was in his mid-eighties then and seemed to be looking back on his entire career as he commented that he wrote “No Country for Old Men,” published in 2005, not so much as a novel but with the intention that it become a movie. It did become a movie, and it was successful both in profit and in praise. After premiering at Cannes, it won two Golden Globe Awards. It was then nominated for eight Academy Awards and won four, including Best Picture.

Cormac spoke of his 1985 novel “Blood Meridian,” saying that it was the only book for which he had done research. “And it was so hard, so hard,” he said, going from library to library, many at universities, and traveling through Mexico. “I’d rather dig ditches,” he said, than do all that research again.

Cormac has a penchant for fierce proclamations such as that. One beautiful day outside of SFI, he was heard to say, “I hate sunshine. Absolutely hate it. Perfect weather for me is fifty-five degrees and drizzling rain.”

On another day, SFI President David Krakauer’s assistant, Tim Taylor, came into the library to say that someone who was to have dinner with Cormac had asked for his contact information. “I don’t have contact information,” Cormac said, as if Tim had suggested that he had fleas. To this day, he has no cell phone, no computer, and his phone number is not given out casually.

A Good Appetite for Great Feasts 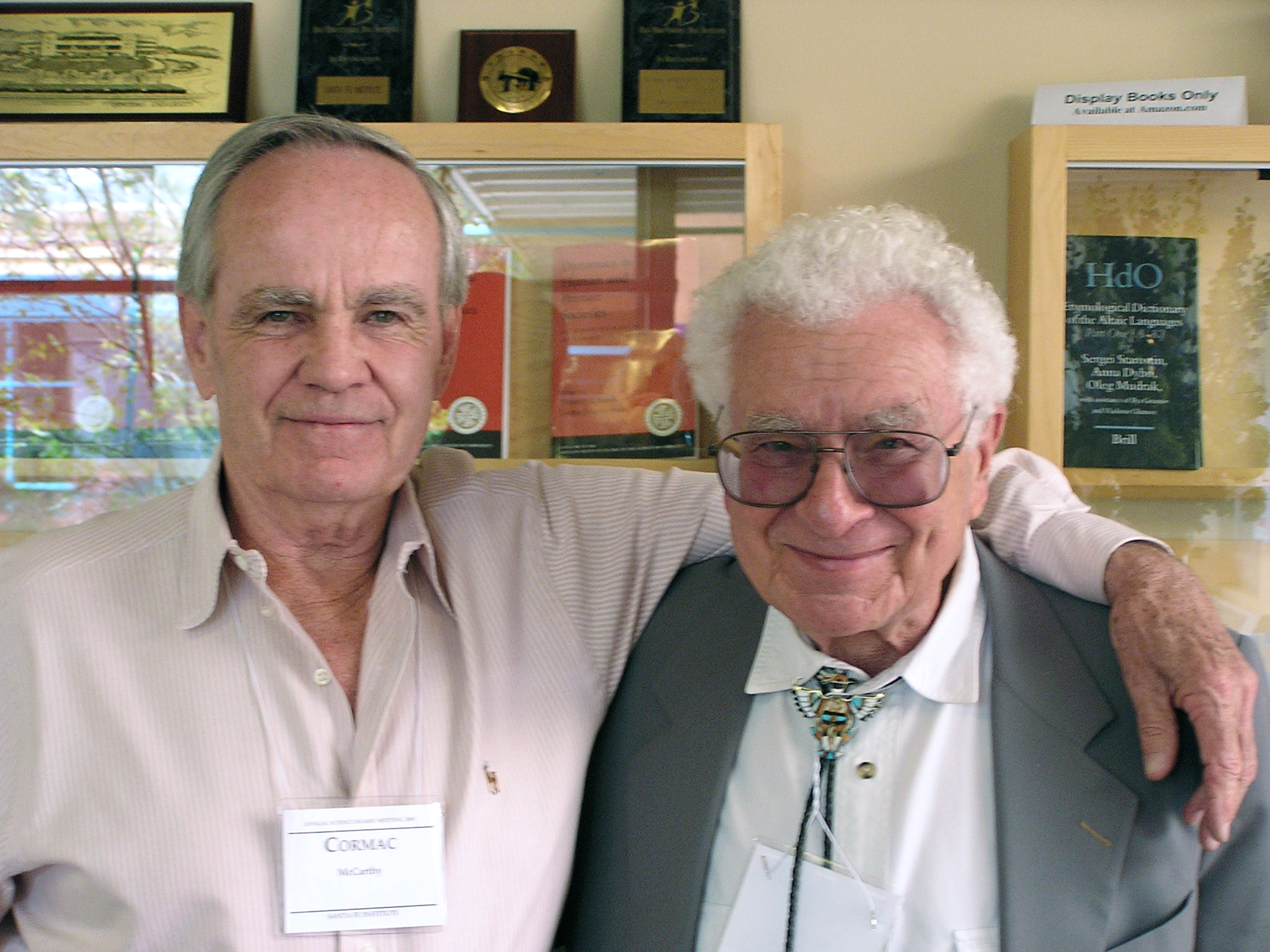 Out of the blue in early 2022, his publisher, Alfred A. Knopf, made an announcement that made worldwide news and sent the publishing world in a dozen countries scrambling for the foreign rights: Cormac had not one but two new novels scheduled for release in the fall. One was “The Passenger,” which those at SFI had anticipated for so long. The other was called “Stella Maris,” which no one had ever heard of. The two were actually artistic approaches to the same story using different viewpoints and techniques, making two whole and complete — separate but related novels, like fraternal twins.

Cormac shared his writing with a few colleagues at SFI including his long-time friend, David Krakauer, who suggested that they might work on an experimental project together inspired by the books (this has been photographically documented in Laura Wilson’s new book of portraits, “The Writers”).  In a 2015 event that SFI hosted at Santa Fe’s historic Lensic Performing Arts Center, people were granted a preview of parts of “The Passenger” in an event directed by David Krakauer, with art by James Drake, music by Cormac’s son, John McCarthy, and performances by Caitlin McShea. The event made clear the Institute’s powerful influence on the novel. Throughout “The Passenger,” great themes of science and mathematics are played out with references to gravitons and S-matrix theory and the names of legendary physicists sprinkled around as if they were old pals. As indeed, a number of them were to Cormac and others at SFI. One of the main characters is a woman, a brilliant mathematician. Her brother is a physicist. One scene in “The Passenger” describes Murray delivering his paper on the Eightfold Way. George Zweig passes Richard Feynman in the hall, and Feynman is muttering to himself, “He’s right. The son of a bitch is right.”

In another scene, two friends are dining on fish in New Orleans. “They shared a bottle of Riesling,” Cormac wrote. “The German varieties tend to be a bit sweeter,” he said. “The French favor whites which can double as window cleaner.”

With this tantalizing preview, we can safely say that throughout the literary and scientific worlds, as within the Santa Fe Institute, people are awaiting the novels with what might be described as a good appetite for great feasts. Of which Murray and Cormac were very fond.

Quantifying the risk of regime change